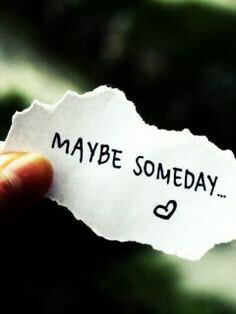 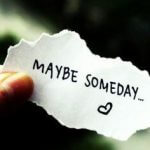 As the saying goes, “There are seven days of the week but Someday isn’t one of them.”

What are you someday-ing in your life?

We will definitely travel there someday.

I will forgive her someday.

You have to tell me that story someday!

I’ll make up with him someday.

I will write about that someday.

Let’s get together someday soon.

We will play hooky and do that thing someday.

I’ll fit into those pants someday.

I’ll send him that picture or song or quote or memory someday.

I’ll try something more fun with my hair someday.

I’ll learn to play the drums, run a marathon, skydive, do karaoke, ride in a hot-air balloon or travel to Japan someday.

Sometimes, the greatest adventures and changes and forays outside of our comfort zones do indeed happen someday. They are often all-the-more delicious because we waited — sometimes patiently, sometimes not — for them to unfold in their own time. Beginnings, ends, shifts, transformations, AHAs — they oftentimes happen someday and they are glorious. And you know what? They were meant to happen someday. Not today.

But what about all the somedays that become nevers? These are the somedays that make me sad. They are full of longing and regret and what ifs. They are tinged, often forever, with the a loss or a sadness that may never be filled or erased. They become part of a badge of honor we don’t want to wear. The thing we longed to create but never finished, the place we never visited, the relationship that never was, the love that waited…and waited, the adventure forever unhad.

I want to be more careful with my somedays. To nurture them when they need to happen in their own time, to respect what needs to become more of a “now” and, ultimately, to forgive (myself and maybe others, too) for what somedays may never be.