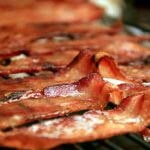 When I was a kid, I was not allowed to eat bacon.

No ifs, ands or buts.

Why? Because it was against my religion.

And, yet, I saw other friends, whom I knew were of the same religion, eating bacon freely. It didn’t make sense, but I followed the rules. Who knows why they were allowed, why they were free to eat bacon, and I wasn’t. Was more expected of me? Were there different levels of religion? Did God look at me differently? Or did their parents simply not care as much as mine did?

Sure, there were other foods — sausage, ham, shrimp, lobster, for instance — that were also forbidden to me through my religion. But I didn’t want any of them. They looked, smelled and seemed gross to me. To this day, they still do. If others were eating those foods, I ate something else. A burger. Chicken. Pasta. Whatever I ate was fine, and I enjoyed it.

I didn’t feel I was missing out.

But the bacon was different.

Because I wanted to eat the bacon.

As I grew older, I began to eat bacon here and there. I couldn’t resist. It smelled so good. It seemed so crispy. Everyone talked about it so much. So here and there, I’d sneak it in: A friend’s house. A college “breakfast” at 2:00 in the afternoon. On a bagel sandwich. I worried that “someone” would find out and think differently of me.

I loved it. So much. But I felt bad. So bad. Guilty. Obviously, I was doing something wrong. Letting someone down. Letting my parents down. Not representing my religion in the way that it deserved. Not acting like the nice Jewish girl I was always assured I was. And if my Bubby found out I’d eated bacon, she may never be able to look at me in the same way again.

So guess what I did? I married someone who also forbade me from eating bacon. Sure, I was an adult now. But I was nothing if not a rule follower. And I respected the person I’d married. If he thought bacon was bad, and my parents had thought bacon was bad, then surely it was bad? And maybe I, too, was bad because I still wanted to have it every once in a while? Yes, it must be me. My problem. My shortcoming. My weakness.

Then we had kids who were also brought up to avoid bacon. Forbidden. Bad. Not acceptable for our family. Years later, the marriage ended. It didn’t occur to me for some time that I was actually free to eat bacon on an as-wanted basis.

I’d actually been able to eat whatever I wanted, at least from age 18 on. But I was scared to eat it. I was scared to admit that what I’d been brought up to believe maybe did not apply to me in every way. That the religion that had been so important to my parents, to the father of my children, to my teachers and community, was not a one-size-fits-all garment. That the strong foundation I thought I’d been given maybe did not actually reflect who I really was inside. That, ultimately, what I’d believed to be law was, in fact, a preference, a choice, a way of life…but not a law.

Who wants to admit all that? Who can even begin to see and acknowledge all of that?

So, today, I eat bacon freely. I enjoy it. I understand, now, finally, what all the hype is about. Bacon works for me. I no longer feel any guilt around bacon. I do refrain, out of respect for their father, from eating bacon around my kids.

You may have a “bacon” too. I’m not telling you to ingest it or rub it all over you or bathe in it. It may not even be food. It may be something you enjoy, something you crave, something that moves you. It is also something that you’d been taught was bad, shameful maybe, unacceptable for sure. Chances are, as an adult, you are free to have that thing in your life. Chances are also that you are scared, hesitant, maybe even disappointed in yourself for wanting it.

Whatever it is, you are not bad for wanting or enjoying or seeking it out. You are human, and in my humble opinion, the world has more problems than who is eating bacon or its equivalent.

Be free and, if you so desire, eat bacon. Lots of it.