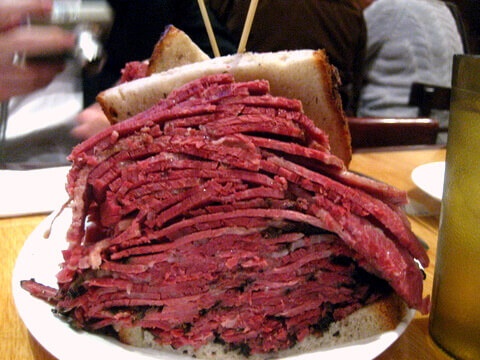 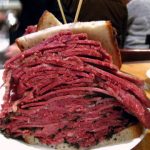 By age 8, I’d decided that no one could help me. No one. Period.

But I pretended otherwise, mostly because of the corned beef.

I was 7-years-old and in 2nd grade when the teasing began. The girls, three of them, were in 5th and 6th grade, and they picked on me for no particular reason. It wasn’t more than your basic garden-variety teasing at the bus stop in the morning. They told me things like “It’s so cold out because of you.”

I was younger and thus an easy target for the others. It didn’t seem to be going anywhere and likely would have ended on its own.

But once my quick-to-react Jewish mother got wind of the situation, she swooped me into the office of “the best” child therapist in our area. My mother spent her adult life on therapists’ couches, and had few coping skills. God forbid her daughter should be traumatized and have to deal with it on her own.

I didn’t want to go. I had nothing against therapy or treatment, but going meant coming hours late to school (apparently “the best” in our area was a little further out of the area). I didn’t like to be late or outside of the lines or not in line in some way. I didn’t want to call attention to myself beyond doing well in school and playing by the rules.

The therapist was dry and bland and utterly unengaging. There is nothing in my memory to suggest that he was at all insightful or helpful or understanding. His solution for helping me process the teasing was to give me a cassette tape (perhaps high-tech for 1978) of his incredible monotone telling me how to relax.

Perhaps this precursor to the meditation or hypnosis audio of today would have helped an adult or even a receptive child, but I was self-aware enough at that point to know that that wasn’t going to cut it for me. What’s more, his voice, especially when talking to me in the dark of the night, actually scared the hell out of me. To this day, I remember how his using the term “wet noodle” (in relation to relaxing, I suppose) was incredibly weird and freaked me out a little (I was 7!).

But instead of telling my parents what a colossal waste of time this was, and how uncomfortable I was coming late to school and how bizarre me acting like a wet noodle seemed, I kept my mouth shut.

The lunches my mom sent me to school with sucked. On the days I visited Dr. Wet Noodle, my parents stopped at the deli next to his office to buy me a special lunch to bring with me to school. I’d walk into school with a treasure: A white paper bag stuffed full with an overflowing corned beef sandwich, a true deli pickle and a small carton of lemonade (no sugar allowed at home, of course).

I felt I’d won the lottery with that spread. I loved it more than I disliked being teased at the bus stop. This lunch made whatever went on at the bus stop worthwhile.

I knew this dude wasn’t helping me at all. I knew whatever his brand of helping kids was all about, it wasn’t for me. I knew there must have been a better way to deal with the teasing situation, but I was too young to have a better solution. I also knew that I had to pretend that the therapy was helpful and working and needed if I wanted to keep getting that weekly deli sandwich.

The trade-off worked well in the short-term. But I learned some dangerous lessons that took decades to un-learn:

I’d learned how to pretend.

I’d learn to smile and nod and go along with everyone when it suited me, and instead of disappointing.

I’d learned that that which calls itself help is, in fact, incapable of helping me.

I’d learned I was broken and no one could fix me.

I’d learned I was incapable of fixing myself.

I’d learn that food brought comfort. Even when people didn’t.

It took me a long time to see these seeming absolutes for the false beliefs that they were.

It took even longer than that to replace these false beliefs with the truth.

And it took even longer than that to find better sources of pure pleasure that I’d thought only a corned beef sandwich could give.