Quit Your Whining (Or, Why I Have No Patience For Writer’s Block)

by Allison Nazarian | Life Lessons, The Life of Allison 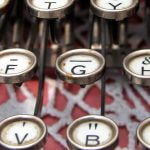 I always hated the term “Writer’s Block” because it isn’t a block and has nothing to do with blockage.

What it is, actually, is a reason, a back story, a blah-blah-blah.

What it is is an excuse. Or multiple excuses.

I always hated the term because I hate excuses. I hate to make them and I hate to hear them. And, boy, do I hate to pretend to believe them when someone else (especially someone else who is under the age of 18, shares my DNA and has the same home address as mine) wastes my time with them.

Any time I find myself falling into “Writer’s Excuse,” I remind myself that it is write-or-bust. Do-or-die. There is no back door. And as Tom Hanks’ character says to one of the girls in “A League Of Their Own,” “There’s no crying in baseball!”

In other words: Just. Write.

With that in mind, here are some facts: Since this April blog post in which I discussed habits, and the two in particular that I was focusing on, I have done and not done the following:

I am not freakin kidding.

And you may say “Of course you wrote, that’s what you do…you are a writer!”

Well, yes, I am a writer, but one who did not write a word on my own, without being paid for it and then handing it over to a client, in about 20 years.

I tell you all this by way of showing you how strongly I started.

I attributed this burst of writing it to caffeine (after having given it up, by the way, for at least a year) and to my daily morning walk.

I attributed it to my new openness, my coming out of the closet and being public about my status as a WRITER.

I attributed it to my boyfriend who brought calm and peace into my life.

I attributed it to the people and situations and stuff I got rid of that also brought peace and calm to my life.

All of that is legitimate…but what it really came down to was something very simple.

If you come closer, I will tell you….

I sat on my freakin (some might say fat) arse every day and Just. Wrote.

As Sam Freedman, the brilliant and kind professor from my grad school at Columbia University reminded us more than once:

I tried not to edit.

“Don’t judge, just write” I told myself. (And told Ori. And Elizabeth. And probably others.)

I rode that “I Am So A Real Writer” wave for weeks and it was great.

But the wave has crested, seemingly.

Now I am just coasting along.

The last great run I had was on a plane to Chicago and then in the airport in Chicago waiting for my return flight to Florida 2 days later. That was about 3 weeks ago.

Until and including then, I wrote a lot and it made sense and seemed to be going somewhere. I could see my book. I was visualizing the Barnes & Noble book signings. The important meetings with my agent and my publisher. The way I was going to thank my family and friends in the Acknowledgments. And so much more….

But since Midway Airport, I seem to have lost my flow.

It’s been more forced than anything else. Painful and not in a good-painful way.

Meanwhile, during this particular dry spell, I kept writing.

I wrote about the things we let ourselves believe even when we know we have no business believing them – and how we either fall apart of rise to the occasion when we realize we’ve been duped.

(I abandoned this topic because I felt I was focusing too heavily and negatively on the crap I believed in the past – like the business partner who tried to convince me to stay with him by saying “Your grandmother came to me in a dream and told me I had to take care of you.” Like, who cares and why go back to that nonsense?)

I read “The War of Art” to try to figure out where I was going wrong. What I was doing wrong. Why it wasn’t happening for me right now when it started so well.

I updated my Netflix queue a lot. (#Important)

I ate a lot of chocolate and nachos. (Not together and not always smart, by the way.)

Which brings me to the reason I wrote this blog post in the first place. I don’t believe in Writer’s Block.

Don’t get me wrong: I believe writing, even for the best, most proficient and most prolific writers, can be tough, slow and painstaking. Feast or famine, at least in my experience, is really a quite accurate description of how it works.

This whole experience of stepping into my writer-ness has been what I imagine intense therapy to be like. Every day I force myself to relive, retell, revisit and sometimes even acknowledge for the very first time how I feel (or felt) about someone, something or some place big (and sometimes not so big) in my life. I think I have cried more in the past two months than in the past 10 years combined.

All of that is good because I don’t believe I can move forward without looking at all of that “stuff” square in the eye. One thing I have learned is that there is no such thing as not dealing with something. Sweep it under the rug, bury it, pretend to ignore – fine. But eventually that shit comes back and demands to be reckoned with.

And what I am thinking is that my day of reckoning has come.

In fact, as someone on the verge of (finally) stepping into my greatness, I am fairly certain that nothing new, big, great, awesome will happen until and unless I deal with this, write about it and, yes, embrace it so I can let it go.

Sometimes it sucks. I cringe to think that another human being may or could actually read it at some point. I remind myself to back it up somewhere secret and take it off my computer in case I die in the near future and my horrendous writing is discovered.

And sometimes it is brilliant. As in the kind of brilliance that proves beyond a shadow of a doubt that there is a God and that He gives each of us at least one deep and divine gift.

As in, the kind of brilliance that comes when I am stripped bare, when I am devoid of distractions and when I am utterly and totally fed-up with myself and I. Just. Write. One letter after the next, word after word, sentence by sentence, paragraph after paragraph until, somehow, I have my 2500 words and another 2500 and then another and another.

And in those moments I know with certainty that this – THIS – is precisely what I am supposed to be doing, not just right now and here, but in my life and from my soul.

Those fleeting moments make the rest of the moments – sometimes full of angst, bitchy self-talk and all kinds of doubt and question – almost OK.

So the moral of the story….at least for today? Well, let’s see…:

You probably have writer’s block/writer’s excuse of some kind. And chances are it is totally unrelated to writing. There is something in your life that, when faced with doing it or not doing it, you have a million and one reasons why it is hard to do it and why you can’t/won’t/shouldn’t do it. And yet, you know deep down that the only way you can really live the way you are supposed to is to just f***ing do that very thing.

And related: There is something you were put on this earth to do. You already know what it is. And chances are, most of your stress, anxiety, doubt and excuses come from running from it, turning your back on it and/or not resolving other things that would allow you to do it.

I didn’t say any of this was easy. It is hard as hell. And don’t blame me for any of this. I am not telling you anything you don’t already know. And even if you don’t know some of it, I didn’t invent it or make it up. I’m just the messenger.

Ultimately, only you can do that very thing that you must do. If not for us, then for you. (Or, if not for you, then for us.)

And if you don’t, it is possible that you will have to do that very thing in a whole other lifetime, and maybe that next time it will be less easy or less clear. Not good odds, if you ask me.

As the wisdom on the T-shirt my ex-husband so enjoys to wear reminds us, “Save The Drama For Your Mama.” Your stories, excuses and, yes, your writer’s block won’t get the donuts made.

So spare us the drama and just do what you need to do. That’s what I am trying to do myself, right here in my little corner of the world.

I’m just going to keep writing and eventually something has to give.

That’s my story and I’m sticking to it.