by Allison Nazarian | Life Lessons, No More B.S., There, I Said It 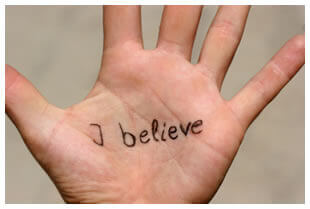 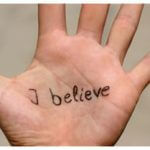 At some point, I stopped being a believer.

I once believed, then I didn’t. And I haven’t for a long, long time.

In anything for that matter.

Belief is kind of like a stew with three equal parts trust, faith and something I’ll liken to gumption. Belief is about trusting in the unknown and the unseen (which is basically faith, no?). The gumption part is the part where you get into action and do stuff even if you don’t know exactly what is going to result from the stuff you are doing.

(By the way, Believe: “to have confidence in the truth, the existence, or the reliability of something, although without absolute proof that one is right in doing so.”)

Think you don’t have to believe? That believing isn’t important?

Ok. That’s cool. Why do some people shine, soar, accomplish all and others — even if they seem to be more capable, more skilled, more equipped to shine, soar and accomplish – never quite make it?

Is it luck? I don’t think so. I don’t believe in luck.

I will write that again:
The belief in their ability to do “it,” is stronger than their fear that they will fall flat on their faces. <—And that is where many of us, myself included, stop the presses.

We say “It can’t be done.” Or the more specific, “It can’t be done by me.”  (Translation: I’m going to stop now so as to minimize the potential for screwing up or embarrassment. Or, I don’t want anyone to know I messed up, so I’d rather not even try. Or something along those lines. )

In ourselves. In one another. In anything.

Day after day, month after month, maybe year after year, that attitude of non-belief is hammered into us — by that person, those people, maybe even by our own selves — until it becomes part of our very fiber. It is no longer separate or new, but is now part of all we do and think.

It becomes our reality.

And it stays our reality.

Maybe someone you know has your best interests at heart (or a total stranger, for that matter) says something to you, innocently or not, that changes everything.

Or you have a “Stop-The-Bus Moment” or a “Switch” that changes everything.

Maybe you have a dream, or hear a song, or see an old friend or smell a scent that reminds you – of who you really are, of what you are really about, of what you are fucking capable of if you actually stopped believing the bullshit and started believing…really believing.

Or maybe in the most inconsequential of moments, you look at or listen to that person you thought believed in you and a voice inside you pipes up and asks “Why the fuck have you been listening to this Bozo for so long?!”

“What am I waiting for?”

“How does not believing help me — or anyone else for that matter?”

And then, finally, you get to work. You focus. You get clear. You stop doubting and you start moving forward. Because (come closer, this is the big secret…) believing needs to be coupled with action to actually make waves.  And action, well, action takes work. (Unless you subscribe to the Magical Fairies Theory.)

Oh, and you also make sure those people who want to keep you not believing, who want to see you play really, really small, who are scared shitless by your potential greatness (and by theirs, for that matter) are no longer fueling your engine with that crappy gas.

Because last I checked, they aren’t living your life. YOU ARE. (And if you aren’t, well, you might want to get on that right about now…)

P.S. First person to tell me below in the comments the meaning/connection of the title of this post gets a free copy of my new book Love Your Mess!